Important objectives of this street: 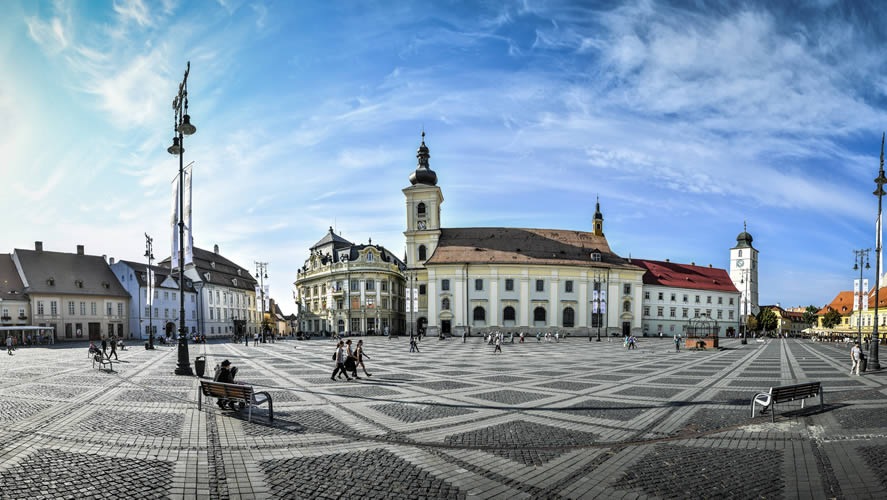 The square exists since 1366, when the third fortification belt was completed.
It was mentioned in 1408 by Mathias Baldi who bought and repaired a stone house in the Large Square. In 1411 Mathia Tromenauer sells a stone house situated in this square to Nicolaus Jenkowitz. The same year, the square is mentioned in a document as a cereal market.
The northern flank was first formed by a construction belonging to the Guild of Tailors, erected in 1466 (one of its wings looking onto the Small Square) and other medieval houses.
During the Middle Ages, the square was the stage of the most important events of the city’s daily life, such as public gatherings but also executions.
The guards’ house was placed in front of the Haller House (at no. 10) until 1775 when the Guard was moved in Schmelius’s house, the residence of the commanding general.
The square has a maximum length of 142 m and a maximum width of 93 m.

The Fountain of the Large Square

The existence of a fountain in this location is mentioned in 1538, its basin being used by women to wash clothes and its gutters were used by animals to drink water.
In 1798 the fountain was adorned with a wrought iron shade donated to the city by Fileck, the leather dresser. Fileck also financed the construction of a new basin in 1819. In 1920 the old iron grid of the fountain situated in this square is reinstalled. The grid was donated by general Falkenhayn in 1916 and on top it had a stork with a snake in its beak. In 1948 the fountain was demolished. In 2006 the iron grid fountain was recreated.